Remember that dotted road on the map—-I feel like the cartoon character where there is a big flashing sign saying DON’T GO IN THERE but I can’t see it….

I had gotten so many good recommendations for Sgt Kai that I couldn’t resist using him, and the bottom line here is that he is sooooooooooo worth it. BUT….there is that dotted road…He and I traded pages and pages of emails trying to hammer something out for me that would satisfy my real curiosity about northern Thailand and the tribes that live there. I didn’t want to see “THE HILL TRIBE VILLAGE: Go here for trinkets.”

I know now that my instincts were solid in that regard.

Sgt Kai picked me up at 8:30 on Wednesday in his cute Isuzu SUV and then we picked up his associate Nooy, the lovely women who picked me up at the airport. I am not quite sure why, but I have a hunch he did not feel conformable being the guide and driver on an overnight with a women…or maybe not.

As soon as we started talking I knew this was gonna be fun—he’s very relaxed and loves to talk about Thailand , his time in the army —we started driving out of Chiang Mai and I asked what our plan was—” no plan” just see some villages not on the beaten track, visit the caves at Chian Dao, and end up in Tha Ton for the night—sounded good to me.

Nooy was designated the navigated because she knows the roads much better—we avoided the hiway and were on a two lane blacktop that was wandering north…until we took a right onto a dirt road.

I am sure that if we had a map it would have been a dotted line. I cannot even describe how beautiful this area was—and I so wish I knew where we were!

Climbing ever up, the road narrowed. We saw no one until we passed a moto standing by the road—didn’t see the owner but there had to be someone….We came to a slight rise, and ooops. Stuck. We all got out to look. I think he was a bit embarrassed untiI I started to laugh…we were well and good stuck there and we could not get the car out of the mud. But what can you do? I asked for adventure.

Nooy finally went back to where we saw the moto, and found two workers who came to help. I kept saying that we had to push it out, but the “guys” insisted on trying to put rocks and boards under the wheels…that would have been ok had be not be hung up on the running boards too….

Well, we finally had to push. And we did. Having had plenty of time to scope this out, I chose the side where it wasn’t muddy and avoided the mud shower that Nooy got.

But we got out…and continued along the road that didn’t seem to get anywhere…we were headed to a village of Palong that was NOT supported by the government, then on to a school for the very poor that Sgt Kai wanted me to see. After another 20 minutes on the dirt road, we came upon this very beautiful house in the middle of no where, and were told that we had to go back the way we came.

I don’t think so.

Well, we kept going on thru some of the most beautiful country you can imagine—the type of thing seen only in beauty shots from Conde Nast Traveler. Rice paddies with one ox in the middle, purple mountains in the distance, and everything is GREEN. Much was made of Nooy not knowing her right from left, but all of us I think were enjoying the adventure.

And we ended up exactly where we started!! Only this time we turned right instead of left.

We found the first of several villages that morning—and if you are not of the strong of stomach and heart, this kind of adventure is not for you. They were definitely not the “human in a zoo” Hill Tribe village that the Thai government has set aside for tourists. These were the ones that got left behind.

(And before anyone has a moment’s thought of OH that’s horrible, let me just remind you of what we did to the American Indian. I had made up my mind that I would not bring my Americanized judgment muscle with me and I do believe that for the most part I was successful. I did not judge the poverty or the life of the villages that we saw—in Thailand or Cambodia. I cannot judge their government lest they turn that mirror on me.

These villages are poor beyond what we can imagine. Or what I would like to describe here.
Whether they were Karen, Palong Lisu, Yao or any of the other hill tribes that have settle in Northern Thailand, Cambodia and Laos, they have a specific culture and a somewhat nomadic lifestyle. It can be said that they have a slash and burn attitude toward farming and when they are done, they move on. So they have been restricted where they can live in Thailand, and with those restrictions come the inevitable lack of education and information. This is passed down like an inheritance from generation to generation.

But I did not come away with a sense of pity for them, but that of resigned resilience. )

We handed out some cookies and such and looked at some weaving—I got my first look close-up of what chewing beetle nuts really does! Not a pretty picture.

From here we moved on to a school for the hill village people—we helped with lunch. A few of the more enterprising older kids had filled balloons with Kool-Aid and frozen it to sell—I bought all they had we had a great time treating everyone.

From there we headed to Chiang Dao—caves used for centuries by meditating monks. This is one instance, of many, that I was glad for doing something touristy—they were magnificent!

The Peak of Doi Chiang Dao Mountain is 2225 meters above sea level making it one of Thailand’s highest mountains. The caves extend around twelve kilometers into the mountain and but only 5 areas are designated for visits (Tham Maa, Tham Kaew, Tham Phra Nawn, Tham Seua Dao, and Tham Naam). And only two of these have lights—the rest are lit by lanterns that are carried by guides. I opted out of this part of the adventure as some of those “dark” caves are VERY tight and you have to crawl.

The caves contain crystals that have formed through dripping water – these are extremely impressive formations and make the visit well worth it. The two I visited the two main caves (Tham Phra Nawn and Tham Seua Dao) that have electric lighting and can be visited without a guide. But I had Nooy to tell me all about it. (Sgt Kai—well he “meditated for this part”.) The caves contain a number of sacred Buddha images, as well as resting monk images, but as they are lit only by sporadic florescent lighting it was hard to shoot pictures.

The caves are mainly visited by Thai, as they are difficult to get to, so they were virtually empty. Outside there are vendors selling herbs and such. Sgt Kai and I discussed the efficacy of herbal healing and we both agreed that there are things that herbs do that we cannot explain. I bought beautiful saffron here for pennies.

We ate a late lunch in a Chiang Dao village local eatery, where I a

te noodle soup (what else?) and watched as a papaya salad was being prepared. We headed a long to Tha Ton where we were to spend the night. The drive to ThaTon was uneventful—we made a few more village stops, and around 6pm arrived at ThaTon.

ThaTon, and the ThaTon River View Hotel (sic) sits so close to the Burma border that Sgt Kai jokes that the border guards can look into your room any time.

The immediate area has attracted many of the displaced hill tribe groups to inhabit its verdant hills and lush valleys. Yao, Lisu, Lahu, Karen and Akha peoples have all made their homes here spreading out among the foothills and along the river. They were closely followed by Chinese Haw and the remnants of a Nationalist Chinese (Kuomingtang) army that fled China in 1949 to Burma, and arrived in the area in 1960, having been expelled from Burma following political changes there. 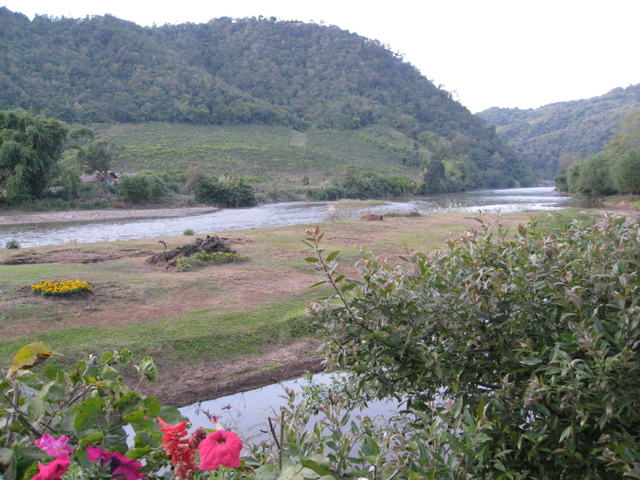 The ThaTon River View Hotel sits right on the Mae Kok River and is set amongst some of the most beautiful scenery imaginable. But we are in the north, and the weather started to chill as soon as the sun went down…and I mean CHILL.

Nooy and Kai checked me and went to another guest house where they were staying. I was there alone. ALONE means VERY VERY freaking alone as everyone at the “hotel” was Thai and NO ONE spoke any English. It gave me a moment’s pause. (Does anyone else remember the very forgettable Debra Winger movie, The Sheltering Sky?)

The rooms are Spartan in the extreme but would have been OK during a warmer time. They have no heat. The room are much like the auto courts that sprang up in the 50’s across the US—2 room connected, then a space, then two more. All spread out so every single one had a view of the river. It was really lovely, but cold. I had nothing but a thin sweater since we had been in 80 degree weather for almost 2 weeks, I was good, So I thought. WRONG.

I tried asking for a small heater but they showed me how to turn on the air conditioning. Nope that won’t do. I gave up and decided to have some food—dinner was passable but not memorable. I ate, went back to the room, put on all the clothes I had with me, got down all the extra blankets, and looked at all the pictures I shot that day. I had twelve hours to last.
I could do this.

I was so cold I took a scarf and wrapped my head Khmer style, and NO YOU DO NOT GET TO SEE IT.

Eventually the Thai version of American Idol put me to sleep —the morning could not come soon enuf.

If it’s Tuesday it must be Yui.
What’s wrong with this picture?