Soup: Putting it all together for SouperBowl 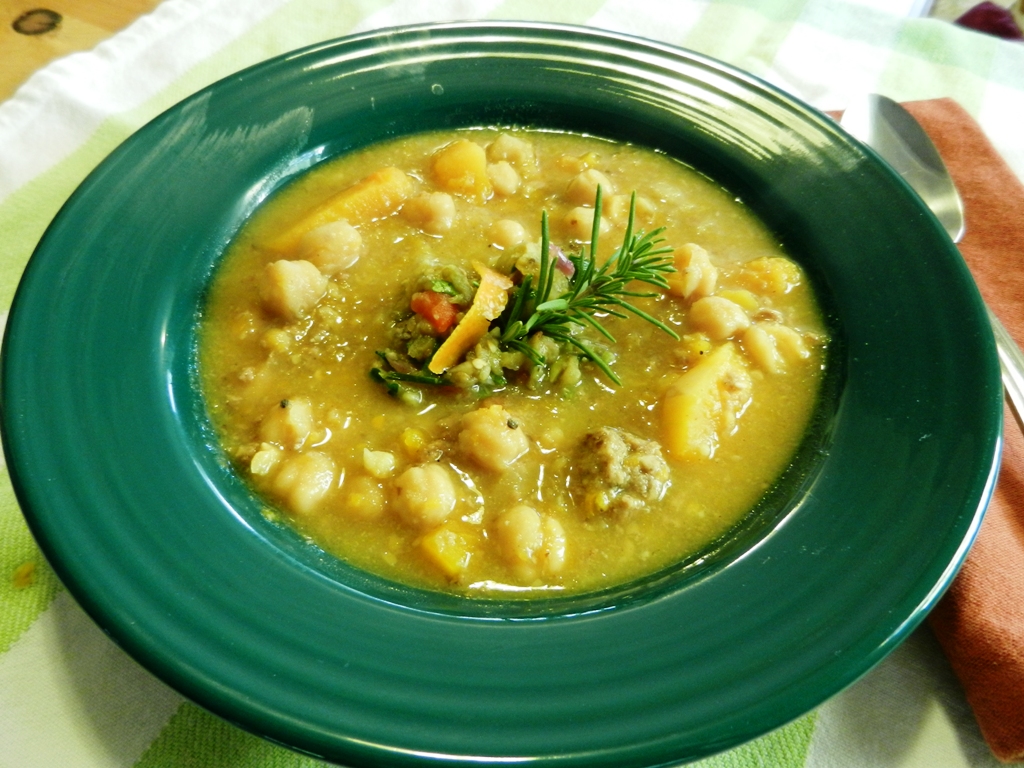 My daughter, a “former chef”, started her cooking career making pastry for an Italian restaurant in Santa Cruz. She quickly moved up the ladder, and then moved to Spain. After spending some time there she came back to LA and started working a new restaurant in Los Angeles as a prep cook. The story of how she was hired at this now prominent restaurant is hers’ to tell (I hope she does some day).

Like her first restaurant job, she moved up quickly, but one of the positions she held was “soup queen”. It was her job to make the daily soup special as well as the standard clam chowder.   I remember buying her a small paperback cookbook on making different kinds of soup. I wonder if she still has that book?

It doesn’t matter-she didn’t need it then, and doesn’t need it now. She inherited the same gene I did from my mother of being able to make soup from almost anything, and I can’t wait to sample what she made for #SouperBowl. I know it will be delicious.

My ability to make soup may be inherited but I remember my fascination with started with a children’s book. I was 8. Does anyone else remember The Boxcar Children? Orphaned, they found themselves in the forest, living in an abandoned boxcar & foraging for food. ( They were ahead of their time! ) They made soup from what they found. Wild onion, carrots and a potato I believe. I was intrigued with their resourcefulness. My Mom, who never saw a left-over she couldn’t “repurpose”, encouraged this, and I still think “soup” when I see a fridge of leftovers.

I didn’t eat much soup during my recent trip to Italy. But I spent 2 days in Tarquinia, when I did eat a bowl that inspired me. Tarquinia was an unplanned stop. It  is a small coastal town, an hour north of Rome. Seldom visited by non-Italian tourists, it is eerily empty at night. I didn’t have a hotel nor did I have any restaurant recommendations. On my first night I ate at a restaurant called Abaradam where I had a ceci & squash soup that was subtly seasoned and very flavorful. I asked what was in it, and they told me that it was flavored with some salami ends and pancetta, a little rosemary & garlic. Whatever the cook found that morning. This was a soup after my own heart, and I knew that I had to make it. 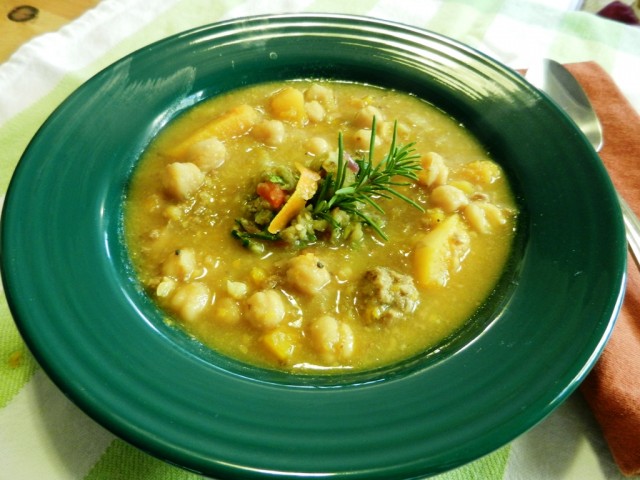 I have made the soup twice. The second time was for this SouperBowl, and I just knew that it would adapt perfectly to meet this SouperBowl challenge of an Italian soup using beans, eggplant and orange rind. I only had some homeande sausage so that’s what I used this time. The first time I did use salami & other charcuterie ends–delicious.

You can find the recipe for eggplant caviar here. This soup can easily be made vegetarian by eliminating the sausage & chicken stock.

1. Clean the dried garbanzo bean under cool water. Bring 2 quarts UNSALTED water to a boil, shut off heat and put the beans in to soak.

3. After the beans have soaked ( 2-3 hours or over night in cool water) drain them and put in a 4 quart pot with one quart or so of the chicken stock. Cook over low heat for an hour.*

4. In the mean time, sauté the sausage until brown and crumbly, add the onion and garlic and quick cook until just tender. Add the meat and vegies to the pot and check for the stock level. Make sure the stock is about 1/2 in above the beans.

5. Deglaze the sauté pan with about 1/2 cup white wine, and add to pot.

6. Cook beans until tender, then add the squash. Cook for another 30-40 min until squash is just barely cooked.

8. Add a sprig or two of rosemary, and the orange rind and cook very gently for another 30 minutes stirring occasionally. Remove rosemary before serving and discard.

9. Serve with a scoop of eggplant caviar in the middle, garnish with rosemary sprig & a thin slice of orange.