I have been thinking a lot about food lately.

Real food, fake food and good food. Just food. It’s Memorial Day weekend and most folks consider this to be the start of summer, so lately BBQ food has been coming up a lot.

I am a California girl, where it is summer 350 days a year. The other 14 don’t count. We can fire up the grill whenever we want. I have been known to do it in the rain.

Like most kids growing up in the 50s and 60s California (ouch!) we used our built-in BBQ a lot. Chicken, pork beef—everything could go on the grill and did. Once my Dad brought home a small live goat—well you know the end of that story. 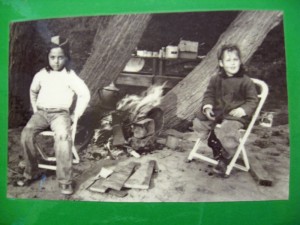 Outdoor cooking was a big part of family dinners. Family beach parties often involved cooking over an open fire using an old refrigerator grate. I have the best picture of my brother and me, and while that is another story, the picture is too good to pass up.

But it was never BBQ. Really. My family is Italian, and open fire cooking did not involved anything as complex dry rubs and slow cooking pork for hours. BBQ’d chicken was brushed with a mixture of olive oil, lemon juice, garlic and salt. The “brush” was made up of rosemary, just picked and tied with string.

Pork was rolled with herbs and garlic and cooked quickly. You’re getting the picture. Handmade pasta, big wheels of Parmesan and handmade olive oil from the neighbors were every day food to me

While I was thinking about this just before Memorial Day, I was trying to date when I had REAL BBQ and where was I ? I think it was Austin 1988-I was there to celebrate my friend Joe becoming the President of Houston-Tillotson College. As I thought about all of us sneaking away from these very formal activities to scarf up spicy saucy BBQ, I remembered another, much earlier event where open fire cooking and pork played a big role.

During my childhood, whenever my dad went hunting and he passed thru Sacramento delta area, he always stopped to pick up some pork from “the Chinese guy”. I think maybe I was 13 when I first tasted this pork. Spicy, and well marinated, it melted on to the grill, the outside becoming crusty and the inside moist and tender. This pork was loin, covered with a fine layer of white fat on one side. He kept it in the marinade in a barrel.

A small wooden wine barrel I recall, and he picked it up out of the thick dark sauce, and let it drip, then put it in foil and wrapped it tight. As a teen, it tasted, well, exotic, to me. It would be almost a decade later when I finally learned what the flavorings and spices were. But I never forgot the taste of it, and on and off have worked at recreating that flavor for my own marinades.

Another event that I remembered this weekend about that same pork loin was this: late fall 1969 or 1970, and my then husband and his best friend, just back from Viet Nam, and I were going hunting with my parents up near the Idaho border. We would then meet our friend Tim in Boise for a few days. It was the first time that I had taken any time away from our almost year old daughter, so it was an EVENT.

I am sure that there are other tales to tell of that trip. Losing a favorite quilt in a motel in Alturas CA. Meeting up with Tim in Boise and the hilarity that ensued there. But the thing that sticks out is the pork loin we cooked outside over a pit fire.

The three of us shared sleeping in a modified VW bus (of course) and my folks in their camper a ways away. We ate with my folks the first night in camp, and after a fruitless second day of deer hunting, we built a cook fire and decided to drink some wine and cook the pork loin we had brought. We were going off to Boise the next morning.

We drank a lot of wine, and although I don’t remember what else was on the menu that night, I do recall to this day how good that pork tasted. Threaded on a crude spit, and fire roasted, the marinade forming a wonderful crust, it may have been the best thing I had ever eaten—up to that point. We ate it with our fingers and finished all the wine. Life was good.

So it made perfect sense to me that when Jacqueline Church, Twitter handle @LDGOURMET, web site http://jacquelinechurch.com/ said she was looking for guest bloggers to do some BBQ cookbook reviews for her blog, I jumped at the chance. You’ll see my review on her blog later this week, and a riff on that well remember inspiring marinade from long ago. Stay tuned and I’ll let you know.

In the meantime, tell me about your first time with BBQ.