Tuesday Dec 4th thru Sat Dec 8 2007
In my mind now the 5 days spent in Cambodia are compressed into picture bites: the first glimpse of Siam Reap airport ( What’s that beautiful building doing here?) to the last as we pull up and over the short airstrip to go back to Bangkok…

We came to do good stuff, and we did. We came to see the famous temples of Angkor Wat, and indeed we did.

Built in the 9th century the temple complex at Angkor is made of scores of sites—filled at this time for year with tourists from the entire world, they chatter and shuffle along pathways walked by kings —there are few actual Buddhas left in any of the temples. They have been looted by countries too many to count, including their own

The devastation wrought by the Khmer Rouge is apparent everywhere you look. 65% of the population is under 15 years old, 80% under 25. There is a great irony in the juxtaposition of the age of the population and that of the great temples.

Outside of the Angkor complex, there are hundreds of other sites, some of which have been cleared by CMAC and some not…some like Bang Malea have been cleared but not ‘tricked out” for tourists. Here, we feel like Indiana Jones climbing over stones and through collapse portals. Few foreigners and few Cambodians come here.

I would be lying if I said I could remember them all—I cannot. But I remember the feeling that I got when walking thru them. Majestic—the scale is on par with the Coliseum in Rome…and soft: that’s weird because they are made of stone—and volcanic rock. But carved, intensely and richly carved, and that softens them. And green…the color of the stone ranges form black to mottled greens and white…some rich reds—not form paining I am told, although some temples were painted. The colors are from aging and weather…. 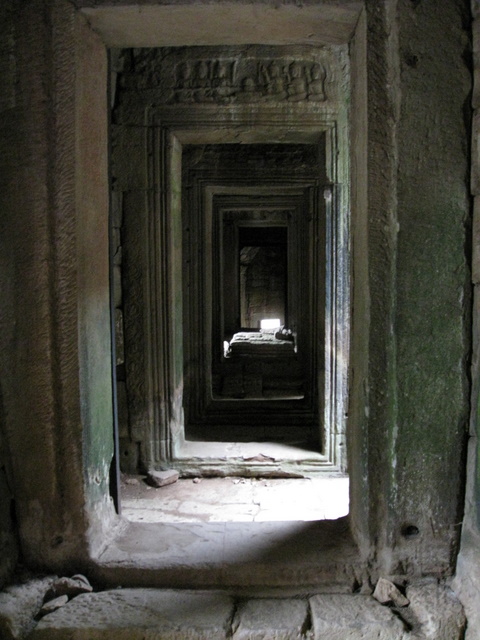 I take pictures of doors and windows—there are thousands and like Kristina they intrigue me: where are they going? Who walked thru them?

Ponhery points out the bullet divots from the war at Angkor Tom. And she isn’t referring to WW2…her war: the one that began with the Khmer Rouge and has not ended yet. Land mines still dot the country side and you dare not walk anywhere that has not been cleared. As we climb over the stones of Bang Malea someone points out the groups of people walking by all dressed in powder blue: these are the new troops of Cambodia—CMAC workers whose job it is to clear the thousands of land minds that still pockmark the countryside. Put there by there own people solely to further kill and maim.

Our second, or maybe our first reason for coming is to bring money for the Ponhery Ly Foundation. (I won’t go into it here, but see Kristina’s site http://www.wired2theworld.com/Cam2007schoolvisits.html for why).

We have brought a significant amount with us and it is to be directed a one school: Kol Keh. Built in the middle of a cleared area, it is so far off the beaten track that there is no track. There is no road, there is an ox cart track. We have discussed with Lori Carlson at length what this money can do, and I am fully convinced that she will use it to it’s best advantage and squeeze every possible penny out of it.

Lori’s story is the stuff of romance novels and adventure tales—a successful business woman in Austin, Lori recently made the decision to come to Cambodia and devote herself to the foundation. She is driven and incredibly focused on this and I have no doubt that she will be as successful in this as she was in her past life.

No one can describe the poverty in Cambodia. It is devastating, but if possible, what I see in Kol Keh leaves me without words: these children eat “rice and salt”. There is some canned fish, but a can is supposed to feed 8 and they have to make it stretch to feed 25…

They are listless–malaise. They are hungry. Food, and then education, basic skills, respect and hope. It’s hard to learn when you need to eat. We bring soymilk, lychee drinks, and ramen noodles. Five packages each and they fold their hand and bow their thanks. Some open the packs and eat the noodles dry. 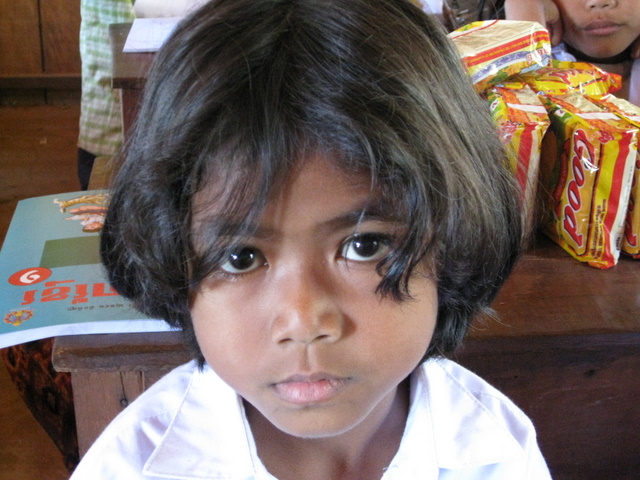 Their eyes make me numb.

Ponhery hands out uniforms and flip flops for each child. The uniform is a badge of honor and success. They have made it this far. For some it will be their best moment, but for others, it will be the beginning of many best moments… and that’s a very good thing.

For better pictures (and more of them) see http://www.wired2theworld.com/, and click on Thailand and Cambodia. Krsitina has several more pages up by today …

To learn more about the Ponhery Ly Foundation go to http://www.theplf.org/. Should you choose to donate, please mention Kristina Johnson or Sharon Miro.

angkorcambodiakoh keh
Previous Post
Do Not Take The Dotted Road